(photos at bottom)
Dima & Dahlia Abi Saab (Al-Awda NY)
Dozens of children were running around the streets greeting us today when we arrived at Abdullah's house, the cab driver we met a couple of nights before. He invited a group of us from the Viva Palestina convoy to his house for some tea, and we were blessed with the presence of Councilman Charles Barron.
When we arrived, we had our cameras out and were video taping and taking pictures of all the children. They all ran towards us and began posing for the camera, and jumping on top of each other and screaming take a picture of me, take a picture of me! Their faces lit up when ever the cameras came out and the dirt on their face from a long day's worth of playing covered their little faces.
The conditions of the neighborhood didn't seem much different from those in a refugee camp that we've seen in videos so many times. Tightly compressed areas (although not nearly as compressed as those in Palestine), not in great conditions and children running around playing with a soccer ball with clothing that were ripped and covered with dirt from the ground that was purely dirt and sand. All the children surrounded us and began kicking the soccer ball to us and we played a short game. The young boys began showing their talent by kicking the ball in the air, bouncing it on their knees, and then flipping it behind them. Then the elders began approaching us after seeing our bright blue Viva Palestina shirts.
People were asking us about our Viva Palestina shirts, and we told them about our mission. To our surprise, Abdullah told us that 95% of the people living in Teqseem Abu Taleb are Palestinians who were exiled from Palestine. So when they found out about the convoy, the older men of the village began telling us about their experiences, and how they left Palestine. After a few minutes of conversing, Abdullah took us up stairs.
We met his five boys, his daughter, Shaima and his gracious, beautiful wife. We all sat crowded in a room, and everyone took out their video cameras as Abdullah repeated his story for the Councilman as we drank the delicious sage tea. Mr. Barron had many questions for Abdullah, but one that stood out the most to us was when he asked if Abdullah wanted to return to Palestine. Abdullah answered with an emotional response: he said he prays everyday that he can return there with his children, and die there because he wouldn't want to die on foreign land.
Sitting with Abdullah, yet again, reminded us all of why we were here in Egypt, how important this convoy is and the value of our organization -- Al-Awda: the Palestine RIGHT TO RETURN coalition. We also realized that when four women came to talk to us as we were leaving Abdullah's home. They were asking if we can take some medicine for their family living in Gaza who are in dire need of medication. They kept saying that all they want is medication, the people of Gaza NEED medicine to survive and the criminal blockade and siege on Gaza is preventing the sick from receiving any medication and people will end up dying.
These particular women had a family member who had recently received a kidney transplant and not only was her medicine completely unavailable in Gaza but the pharmacies in their area wouldn't sell them more than one at a time due to some restrictions. They endlessly thanked us for our mission as we assured them we all desire the some thing, for a Free Palestine!
To get a real taste of life in Egypt, and see how many Palestinians residing in Egypt live, we needed to go to Abdullah's house and enter his life for an hour or so. All the people we met, young and old all wanted one thing -- and that was to return to their land and live in peace in their homes. Abdullah again reminded us of how important this mission is, and reminded us that these are conditions that we are in temporarily, but for the people living in this village, for the Palestinians living in diaspora -- this is their life. 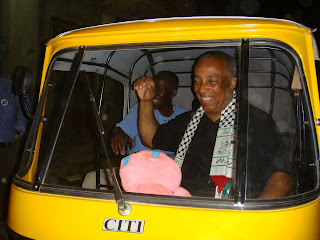 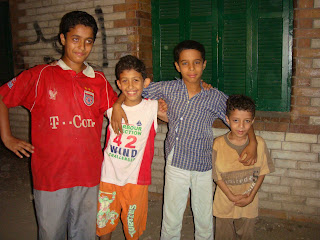 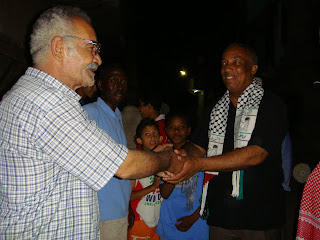 Photos, from top to bottom: New York City Councilperson Charles Barron and Abdullah in his son's cab; some of Abdullah's children; Charles Barron with an elder from the village.
Posted by Al-Awda Blog from VPUS Gaza Convoy at 6:09 PM

If you have an item for us to post, please email andypollack@juno.com
For more information on the Convoy, see
http://www.vivapalestina-us.org/
For more on Al-Awda-NY, see
http://al-awdany.org/