Photos/video of July 1st rally against IOF kidnapping and piracy

On July 1, 2009 an emergency protest took place at the Zionist Mission in New York to demand the immediate and unconditional release of the Free Gaza Movement's boat, SPIRIT OF HUMANITY, all human rights workers abducted from the boat, and the humanitarian supplies being carried to Gaza.
On June 28, Israeli Occupation Forces, in an act of piracy in violation of international law, attacked and boarded the boat, abducting 21 human rights workers from 11 countries, including Noble laureate Mairead Maguire and former U.S. Congresswoman Cynthia McKinney.
When the boat was attacked, it was not in Israeli waters and was on a human rights mission to Gaza.
One hundred protesters turned out with less than 24 hours notice for this demonstration initiated by City Councilperson Charles Barron.
As usual the cops put us across the street from the Mission -- but the first photo shows Charles Barron and the rest of the protesters right in front of the Israeli mission doors, after a spirited march across the street. As Mr. Barron, said "We'll be back!"
See also the video at http://www.youtube.com/watch?v=TyfnknQ8n3k
Click on photos for larger view. Thanks to Vanissa Chan for the photos. 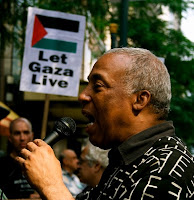 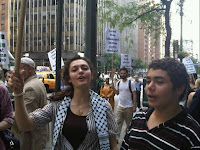 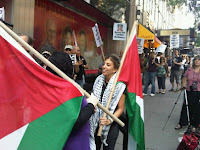 Posted by Al-Awda Blog from VPUS Gaza Convoy at 6:13 PM

If you have an item for us to post, please email andypollack@juno.com
For more information on the Convoy, see
http://www.vivapalestina-us.org/
For more on Al-Awda-NY, see
http://al-awdany.org/